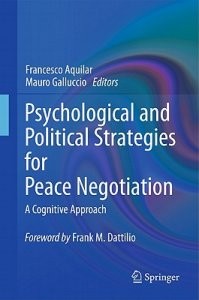 Has been published in PsychCritiques, published on-line, by the American Psychological Association, reviewed by

Almost Everything You Need to Know About Peace Negotiation

This 16-chapter edited volume should be required reading for all negotiators, educators, researchers, and activists concerned for “peace negotiation” and related topics (e.g., national and international conflict resolution, interpersonal and marital conflicts). I offer this ringing endorsement because the editors of Psychological and Political Strategies for Peace Negotiation: A Cognitive Approach, Francesco Aquilar and Mauro Galluccio, have assembled a sterling group of contributors who address a broad spectrum of topics that encompass psychological, social, and political considerations in political negotiation.

In today’s global era our lives have become increasingly interdependent. Events in distant lands now often have immediate and profound implications for everyone. We are, indeed, the fabled “global village” that Marshall McLuhan (1962) wrote about almost a half-century ago. One outcome of our global era is that conflicts—ranging from minor disputes to chronic intractable military violence and wars among nations and different ethnopolitical groups—place all of our lives and well-being in jeopardy. The tightly woven web of international relations leaves little latitude for escape from a host of destructive consequences. Efforts must be made to address these conflicts in substantive and meaningful ways, and the current volume goes a long way toward meeting this goal because of both its breadth and substance.

I found each chapter to broaden my thinking about the many nuances and complexities of peace and conflict resolution. From the opening chapter by Howard Gardner (multiple intelligences) to the closing chapter by Francesco Aquilar (use of social cognitive therapy from individuals to nations), the reader is treated to a range of conceptual models, empirical research, intervention strategies, and informed opinions on the changes needed to improve peace negotiations.

Imagine a volume on peace negotiation that gives rich discussion on so many issues: emotion, communication, and compassion (e.g., Paul Gilbert, Carolyn Saarni); going beyond reliance on conventional appeals to logic (e.g., Robert Leahy); tacit knowledge (Thomas Dowd and Angela Roberts Miller); escalation images (e.g., Guy Faure); pre-encounter communication (e.g., Dean Pruitt); limits of science and sustainability (e.g., Cornelia Nauen); constraints and limitations from constituents (e.g., Druckman, Çuhadar, Beriker, and Celik); and the need for special training of peace negotiators (e.g., Olivera Zikic). The chapter by Meichenbaum summarizes a score of thinking errors that often occur in negotiation (e.g., stereotypes, seeking consistency, attribution errors); the chapter by Karam on Lebanon offers one of the best analyses of an actual peace negotiation that I have read; and the chapters by Galluccio and by Kremenyuk offer inspiring visions for the future for peace negotiation and world peace.

I do, however, have a few suggestions. As a cultural psychologist I would suggest more explicit attention be given to ethnocultural considerations. I say “explicit” because many of the chapters are sensitive to the ethnocultural differences of the negotiating parties, and they address these differences via discussions of emotion, compassion, histories, thinking styles, and so forth. However, I am speaking here about the possibility of focusing specifically on the topic of ethnopolitical considerations via discussions of alternative cultural constructions of reality (e.g., Avruch & Vejarano, 2002; Marsella, 2005, 2007).

Ethnocultural differences have always been a bane in conflict negotiation. For example, in discussing the example of truth and reconciliation processes, Avruch and Vejarano (2001, 2002), wrote:

Most of the truth and truth and reconciliation commissions covered in the literature have worked (when they do) in Christian countries, and have recourse to broadly (if not perfectly) shared Christian values. But any attention to culture should alert us to the recognition that such notions as justice, truth, forgiveness, reconciliation, and accountability—to name a few—are always socially constructed and culturally constituted. Research in conflict resolution has already established different modalities for Islamic and “Western” cultures around such key ideas as justice, peace, and reconciliation—and contrition and forgiveness—and there is no reason to think that cultural differences stop there. (Avruch & Vejarano, 2002, p. 43)

In my work on ethnocultural considerations, I have noted that there are profound differences across ethnocultural groups in the perception, processing, and storage of information about the world across verbal, imagistic, emotional, proprioceptive, visceral, and total body modalities. What is important here is that, too often, Western approaches to reality construction emphasize the verbal/rational linear thinking approach.

Consider our many and varied psychotherapies: They depend heavily upon verbalization—using words to communicate complex ideas, feelings, and memories. However, many groups do not code reality in the verbal mode. As a result, the use of verbal channels to change behavior may be limited.

I can recall a failed therapy occasion with a Filipino plantation worker in Hawaii who thanked me for my efforts after a number of counseling sessions. He said, “Thank you, doctor, you are a good person, but I still don’t feel good.” He did not feel good because I failed to access the many channels of his codification of experience and the rich and detailed material that was there and that needed to be addressed via other methods beyond talking.

He was, as all of us are, a whole person—body, mind, and spirit. I had to learn from this case that I had failed to tap all the modes (i.e., image, emotion, proprioceptive, visceral) in which his experience had been encoded and was being experienced as part of his adjustment. The power of accessing all modes of experience among different ethnocultural groups cannot be ignored or dismissed in something as critical as peace negotiations.

I wish to commend the editors and authors of Psychological and Political Strategies for Peace Negotiation: A Cognitive Approach for an exceptional effort that does much to advance the area of peace negotiation and conflict resolution. I recommend this volume heartily as a definite advance in our knowledge and a definite contribution to peace and justice: not to be missed.