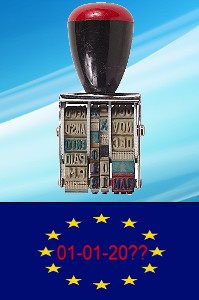 Loyalty to the European Union project has no expiration date:
Negotiating a closer tie among eurozone Countries

Financial crisis is serious and hard decisions should be made as soon as possible. Situations of structural uncertainty, an absence of effective central authority and decision rules, and stalemates in unilateral means of solving problems and resolving conflicts, among member states of the eurozone, are all conditions that call for more cooperation and integrated negotiated actions.

Among decisions the hardest one is certainly that of taking a political beleaguered direction towards a shifting of some of the spending and taxing sovereign powers from Member States of the Euro zone to an European Financial High Authority (and a sort of common collective responsibility for national debts) with the European Central Bank playing a more assertive and active regional supportive role. Governments, especially the big ones, should now demonstrate that they are not willing to put the Euro currency at risk and that they have a political strength to negotiate a deal over fiscal rules in the eurozone as a natural consequences of a project they launched officially in January 2002.

It is too good, for certain big Member States, just to take advantages of countries markets (even Mediterranean ones) enjoying the Euro currency and all the positive gains for national industries. However, it is guilty of greed to assist to the breakup of the eurozone, as they did not have shared responsibility of the success or failure of the Euro.

This told we cannot hide the fact that this crisis has been managed until now with fear and clumsy attitude and has been guided more by selfish and punitive behaviors than by real political and economic vision of the future aimed at restoring market confidence. Sad to say, this state of art has been showing a political void of leadership and a lack of solidarity, one of the main founding principles of the European project. Even going through the above mentioned steps towards a more integrated eurozone, this financial crisis and its bitter (mis)management and communication failure to explain reasons to the “European citizen” will certainly jeopardize the European Union political project. We need a transformative leadership process (Galluccio, 2011; in Aquilar & Galluccio, 2011) showing a structural political strength in making decisions in the eurozone and in the European Union as a whole. European politicians are called upon an era of political responsibility and technical coherence supported by a sustainable and improved decision-making process.

If they want to continue to play a zero-sum game in crisis situations, they should know that their bluff may be called upon and they will be held politically accountable. If European politicians really want to continue to pursue the European Union project, it is time they put their actions where their mouth is. In both good and bad times!